I met Heather Normandale the day we filmed the Earth Day concert in downtown Berkeley plaza. She made such a strong impression from the instant she took the stage. We talked about her background in anthropology, meeting Andean street performers in Paris and her musical bike tour around Europe to inspire people to care for the earth.

Behind the Woman and Musician

LMC: Tell me a bit about your background?

Heather:  I’m originally from Jupiter, Florida, a small beach town on the south east coast. I lived there until I graduated from New College of Florida.

I studied anthropology because I wanted to study music. I felt like I wanted to experience the different cultures of the world and how community forms around music celebration, tradition and how often the two are connected to spirituality and religion.

Music plays a huge role in communities who are oppressed. They need music as a coping mechanism and as a resource. Music forms and supports communities and beliefs. I felt like that was good material for my songwriting.

LMC:I can hear that in your music.

Heather: I went to New College of Florida, which is a small liberal arts school. They have a create your own major. It’s great for people who want to do something a little different. I focused on Spanish and anthropology but I was able to create classes like performance anthropology where I could study gesture and linguistics. I got to dork out around all of the elements of performance.

The cool thing about anthropology is that it makes the familiar, unfamiliar and the unfamiliar, familiar. You’re looking at people very differently from you and understanding the function of the structure of their communities and why people do what they do.

And then you look at your own community and society with a different lens and you realize these are the structures and this is why we do what we are doing.

I was fascinated by all the social sciences psychology and sociology but anthropology had a unique lens.

LMC: It seems quite fitting for your music. Where it comes from and the style. Tell me about how all of that influences your music in regard to “I Go Walking” and “Mother Sorsorne”.

Heather: Why I studied anthropology goes back to when I was in high school. I traveled to Paris on a business trip with my dad who was working for Univision, the TV station in Miami. They newscast the World Cup in Paris (1998).

I was 14 years old and I got to rent a bike and ride around Paris by myself, check out museums and meet people from all over the world. I met people in the subways playing music and I realized you can travel to another country, play music in the subway and people give you money. What?! My mind was blown because I had just started writing songs and I really loved Paul Simon, who has a whole album rooted in African music.

He has songs from the Andean tradition like El Condor Pasa, which was my favorite song at the time, so when I was in the subway in Paris, I walked up to this 12-piece Andean orchestra. It comprised people from Peru playing beautiful instruments and playing my favorite song, which I thought was by Paul Simon but then I realized this song was by the people of Peru. It was a traditional folk song, which Paul Simon covered but then these people are traveling around the world playing traditional music.

My mind was blown because I was thinking of how Paul Simon was helping to make these songs more popular. Certain [pop] artists would make world music more popular during that era and they would go and travel around sharing their music with the world.

That was so influential on my young mind. I thought, “That’s what I want to do!”

The Music, Touring and Inspiration

I moved to San Francisco after college with my bandmate. Eventually, she moved away and I started doing my solo project. I was wearing all the hats like writing and managing.

I started working in a world music agency with people like Salif Keita and Tinariwen, a lot of well-known world music artists, so I got a lot of experience doing event planning, logistics and coordinating tours. At some point I realized, I love meeting these people and helping them but I want to go on tour now.

Around 2010, I met people in the Pleasant Revolution, which were the Ginger Ninjas. They were the band that started bike touring in 2008 with Shake Your Peace. Paul Freeman of Rock The Bike, collaborated with them and they were building together to improve the technology of the bicycle powered sound system and go out and test it in the field.

It was a very DIY. I joined that crew when they were ready to go to Europe because I said I know how to book and organize. I have a lot of experience and foreign language knowledge. I toured with the Pleasant Revolution with the bike powered sound system for six months in 2010, in 12 different countries throughout Europe.

We would put on big festivals in London, Netherlands, Berlin; collaborating with the USA embassy, festivals and bringing that sustainability message. That kind of wild and free, don’t be disconnected from nature and the outside world vibe.

All those things were super influential on me. I’d say that the experiences with Spanish language and anthropology made me look at the whole world in this holistic view of people being very similar and needing similar things but struggling with control, greed and that kind of obsessive behavior that throws everything off balance.

Working in music became very important to me as it’s a way to get into peoples subconscious and plant ideas. When you work with metaphor and melody and harmony, the melody and the harmony have a potent, emotional impact. You can emotionally impact people and open them up with music. You can implant ideas of metaphor in what you believe.

I have always tried to synthesize all that I learned from traveling and studying music and community. I have tried to have my own strong message through music.

Our faith and belief in a goal and common connection is what will probably save people and the environment. That’s what I think. 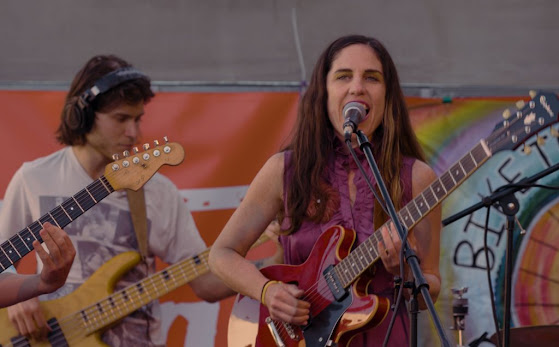 LMC: Where is your home hub?

Heather: I’ve been in the East Bay since 2010. I was in the city for a good four years before that. I enjoyed the music community in the city at that time between 2006-2010.

When I went out of the country on that tour, I returned back here and said, I’m not willing to pay that much money just to live in the city. The East Bay is a stones throw away. And then most of the people I knew from the city moved to the East Bay.

Now I can’t imagine living anywhere else. I love the diversity of the music scene here. There are a lot of great options.

LMC: There is a lot going on in the East Bay. I think the challenge is not knowing where to go or who to see locally. That’s what LMC is trying to do with our upcoming search guide. Tell me about what the local music scene is like in the East Bay?

Heather: I think there are a lot of different circles. It revolves around a social scene. The music scene doesn’t always feel very integrated. But when musicians support other musicians, that increases the inter-connectivity that helps go beyond your friends coming to your shows.

For me, I’ve been excited to work with Bicicletas Por La Paz because they are connected to this whole group of Cumbia and Latin bands that perform together like La Misa Negra and Calmal.

Then there is this whole other category like Femme Freak Folk. Indie folk women fronted bands. My friend started a promotional company called Femme Freak Folk that supports bands fronted by women that aren’t doing traditional stuff but speaking out and being creative. They supported my CD release. I had all female fronted bands for that release.

I really enjoyed working with them because they are all about community, supporting bands and connecting people.

I work with Biketopia Music Collective and I’m often supporting Tom Quell among other artists. Trying to support the other bands that are in the collective, as they are supporting me by singing harmonies or helping out at events. It’s really a gift and a joy. It doesn’t feel like a job that way.

(for the rest of the article continue on the Local Music Channel's website: LocalMusicChannel.com